Escola Nova 21, the alliance started in 2016 and promoted by Unescocat, the Bofill Foundation, the Universitat Oberta de Catalunya (UOC), the Barcelona Provincial Council and Obra Social ”la Caixa”, came to an end with an event at the CosmoCaixa in Barcelona.

The three-year alliance promoting a change in the educational paradigm of Catalonia, called for in the United Nations Agenda 2030, has reached an end, demonstrating that every school can be transformed, and demanding that a large agreement is made to update the entire system. For this reason, it has called for the establishment of a state plan to update the entire educational system over the next decade. The massive mobilization of teachers, families and municipalities from half a thousand centers has provided evidence of the need to universalize this change of paradigm, while the testing of an intensive change in protocol with a sample of 30 centers has proven that every school can be updated.

The closing ceremony was attended by key figures from those three years: the program’s founding schools; schools from the representative sample and the networks; the heads of promoting entities; the Minister of Education; and the President of Parliament. The event began with a collective intervention on the meaning of educational transformation, made by Boris Mir, Deputy Director of Escola Nova 21; Coral Regí, from Virolai School; Sergi del Moral, from the Les Vinyes Institute-School; Ingrid Ballestar, from Matadepera Institute, and Noa Padín, from Els Encants School. The achievements and successes of the program were also presented and the first results of the external evaluation were made public. The President of the Parliament of Catalonia, Roger Torrent, brought the event to a close, highlighting the centrality of the challenge of the educational transformation established by the Agenda 2030 in the field of education.

These three years working jointly with several governments from educational and local administrations have shown that, to achieve the 2030 goal of all schools being equal in terms of educational quality, concrete actions are needed, with transversal and long-term policies that go beyond one single legislature. This is why there is a need for a large agreement to be formed on educational updating, working with teachers and centers, providing them with support, training, resources, autonomy and co-responsibility. Priority must be given to those in environments with the greatest needs, with an inter-institutional action by the various public administrations rooted in each municipality.

You can review the entire final event here:

You can view the press release (in Catalan) of the final event of Escola Nova 21 here: 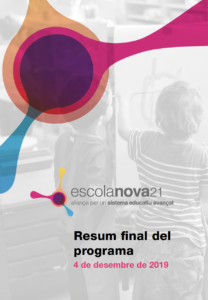