The 39th General Conference of UNESCO met in Paris from 30th October to 14th November. The Conference was marked by a change in leadership at the organization, with the appointment of former French Minister Audrey Azoulay as the new Director-General of UNESCO, taking over from Irina Bokova. In her inaugural speech, Ms Azoulay stressed the relevance of UNESCO’s role in providing creative responses to the challenges of our time.

UNESCO’s General Conference approved the program for the next two years, emphasizing UNESCO’s catalytic role in leading the achievement of Agenda 2030 in Education. In the same vein, a session on Strengthening Accountability for the Implementation of SDG 4 – Education 2030 was held on 1st November, where ministers in two panels discussed the mechanisms for monitoring and reviewing the implementation of SDG 4.

The Member States also agreed to continue the work on the UNESCO Draft Convention on Academic Mobility. This sets out the path for the future of the Convention, which aims to provide a global framework of universal principles and standards for the recognition of degrees, diplomas and certificates in higher education, to be finally adopted at the General Conference in 2019.

Furthermore, the Conference also adopted a new Framework of Standards for UNESCO Associations and Clubs, which provides for the extinction of the figure of “centers for UNESCO” as part of the group of UNESCO associations and clubs over the next two years, which will result in the Center for UNESCO of Catalonia having to change the name under which it was created at the end of these two years.

The official relationship that the Center for UNESCO of Catalonia has with UNESCO, makes it possible for it to participate as a guest at the UNESCO General Conference. On this occasion, we attended with a delegation made up of the Director and the Chairman of the entity. In addition to being able to take part in discussion forums and obtain first-hand information on the definition of the organization’s strategic lines for the coming years, Unescocat had the opportunity to find out first-hand what organizations from all over the world are doing in relation to education and the implementation of SDG 4, presented in parallel events around the General Conference.

Of these side events, the participation in the session organized by UNESCO’s International Bureau of Education under the title “Future Competencies and the Future of the Curriculum” is particularly noteworthy. This event, chaired by the Director-General of UNESCO, was attended by dozens of representatives from the Ministries of Education around the world and representatives of civil society, including Unescocat, and presented the IBE-UNESCO initiative to transform education curricula around the world towards a competence-based, learner-centered approach. 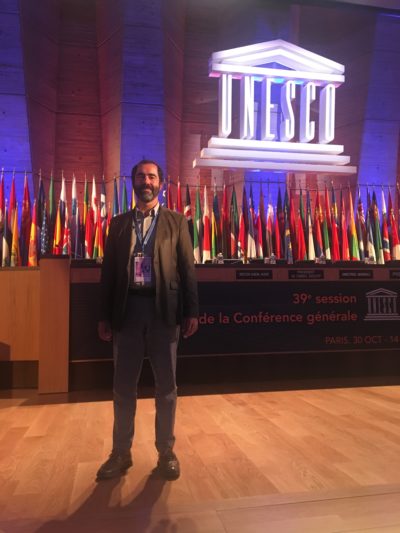 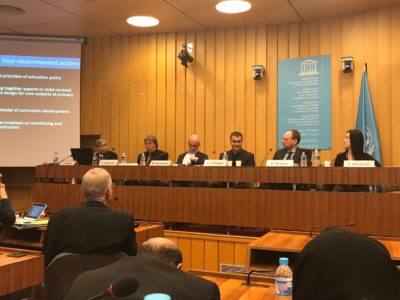